Guide Italy Tuscany Where should i stay in tuscany?

Where should I stay in Tuscany?

Where to stay in Tuscany?

Choosing where to aim for in Tuscany can be tricky, particularly on a first visit, but the good news is that it's very difficult to go wrong; the whole region is beautiful and there are towns and villages everywhere worth seeing. The countryside is fabulous everywhere too and the hilly terrain mean that views are generally quite spectacular.

Tuscany is a region of Italy, on the north western side of the long boot shape of the Italian Peninsula. It is bordered by the Mediterranean sea to the west and by the Apennine mountains to the east. Rome is to the South and the Alps, beyond the Plains of the Po river, are to the North. Here's a map of the region with the mountains and hills marked:

A number of Tuscany cities are world famous - they were self-governing republics over a 1000 years ago, and their independence and wealth lead to the flourishing of thought, academia and art that we now call the "Renaissance" - a re-birth of knowledge after the middle ages.

Today the region is divided in 10 provinces, with Florence as the region's capital. The provinces, shown in this map, are:

The provinces of Tuscany

Each of these provinces has a particular character, though there are also further, different ways to view the territory: often locals will speak of the river valleys as areas with a character and landscape of their own - the Valdorcia, "the valley of the river Orcia" is a prime example; this is the famous Tuscany of cypresses and rolling hills. Hill groupings are another subdivision - the Chianti is the most famous of these, a hilly and forested region between Florence and Siena.

Villa in the Tuscan countryside

Whichever area of Tuscany you decide you'd like to concentrate on - and all of it is beautiful - we think the best way to visit Tuscany is the old-fashioned way: find a beautiful villa in the hills (and we have some within walking distance of villages and restaurants for those wine-tasting days and gelato outings) and then travel to the larger cities. Tuscany Villas with Pools.

Getting to Tuscany in Italy

The main airports in Tuscany are Pisa and Florence. Pisa's airport code is PSA, while Florence is FLR. You can also fly to Bologna, just north of Tuscany (BLQ). This is a good international connection for Americans. Or many fly in to Rome - either Fiumicino or Ciampino. (FCO and CIA).

Perugia is a small airport in Umbria, on the Tuscany border - and in 2020 will have more Saturday flights so is worth considering for those flying within Europe - (PEG).

If you're planning on visiting Northern Tuscany, or the Cinque Terre, then Genoa is also worth checking. It can often be cheaper and less busy than Pisa. (GOA)

If you'd like more information on how to drive to Tuscany, have a look at this article: Driving down to Italy.

Where is Florence in Tuscany?

Florence is the capital and perhaps the best known of the Tuscan cities - it's artistic legacy is enormous. Who hasn't heard of Michelangelo, of Leonardo da Vinci, of Galileo Galilei or of the Medici family?

On the map above you can see a large river; it practically cuts the region in half, first from Arezzo to Florence and then east to west from Florence to Pisa on the coast. Florence is half way along this valley, in a position quite central to the region. Many areas of Tuscany are know by the name of the valleys, while others are known by the name of the hills or mountains. So, for example, all the towns and areas along the Arno are known as the Valdarno (in the Arno valley).

Florence is the most famous city in Tuscany, one of the most famous in the world, and with good reason. The cradle of the Renaissance, it has a never-ending list of fantastic architecture, beautiful museums and great restaurants. It can also be busy so we often advise you find a beautiful villa in the countryside nearby and go into Florence on day trips.

You can see all our Villas close to Florence here.

The Arno river that runs through Florence eventually ends up at the Mediterranean sea in the great city of Pisa. Now mainly famous for its leaning tower, a thousand years ago Pisa was one of a group of the "Repubbliche Marinare" ("Sea Faring Republics") that controlled the mediterranean sea through a mixture of law-enforcement and piracy.

The leaning tower and the whole of the incredibly impressive "Campo dei miracoli" ("Field of miracles") was financed with the spoils of an unexpectedly lucky piratical sortie against Palermo, in Sicily. Owned by the Arabs at the time, they abandoned the city when they saw the Pisans arriving - so the lucky invaders carried away vast amounts of gold, marble and jewels unopposed. How to visit the Leaning tower of Pisa.

Today there is more to see than just the tower - the Piazza dei Cavalieri, part of Pisa's famous University is one example.

To stay near Pisa, have a look at our villas close to Pisa, including places around Lucca and Livorno. We have also included tips on what to see in Pisa and where to eat in and around Pisa (there are some beautiful restaurants on the coast, at Marina di Pisa - the perfect spot if your flight leaves in the afternoon and you have time for a last, alfresco lunch gazing at the sea)

Just north of Pisa, and slightly inland, is the jewel of a city that is Lucca. Given as a gift by Napoleon Bonaparte to his sister Elisa, it is surrounded by beautiful villas built for the local aristocracy on the foothills of the Apennines. Tuscan Villas for rent near Lucca.

Siena, the heart of Tuscany

We have a soft spot for Siena, it is a particularly beautiful city and so is the landscape all around it. Its fortunes began in the 8th century, when the Lombards (think Charlemagne) started to use the Elsa valley as part of their route from Northern Europe down to Rome. The Elsa valley is protected by a range of hills from the mediterranean coast, which at that time was still controlled by the Byzantine navy, operating from Constantinople.

For advice on getting to Siena, for example, have a look here: How to get to Siena, Italy. We'll be publishing more of these for the other cities too.

The Elsa valley became part of the "Via Francigena" (The Frankish Route) that linked Rome to Northern Europe by pilgrimage and trade. Siena, and many of the other smaller towns on this route, made their fortunes trading with the passing pilgrims. Because of this it is dotted with myriads of medieval churches and famous towns.

Read more about what to see in Siena, and to find Villas close to Siena

Many of the Tuscan Valleys are famous in their own right, like Val d'Orcia, that many have heard of. Two of the most famous valleys in Tuscany are the Val d'Orcia and the Val d'Elsa, mentioned above.

What is Valdorcia and where is it?

This is a great area to aim for if you love food and wine, exploring towns and villages interspersed with plenty of relaxing by the pool. Look for Villas in Valdorcia here.

Where is the Chianti wine region in Tuscany?

Beyond the larger mountain ranges that border Tuscany, there are several smaller hill massifs. The most famous of these in undoubtedly Chianti, the famous Tuscan wine region. It lies between Florence and Siena; any part of it not covered in vineyards is covered in forests of holm oaks or beautiful villages. The most famous towns here are Castellina in Chianti, Radda in Chianti, Gaiole in Chianti and more.

Read more about our Tuscany villas to rent in Chianti here.

North of Tuscany and the mountains

The Apennine mountain range borders the eastern side of Tuscany, running down the centre of the Italian boot. As the range goes north it squeezes towards the western coast, giving Tuscany a long narrow tongue pointing north. A further range runs parallel to the Apennines - these are the Apuan Alps, and are made entirely of the white Carrara marble that Michelangelo, like many other Tuscan sculptors, used in his works.

It's impressive to look today at the ancient marble quarries in the Apuan Alps (you can visit them by Jeep - ask us for details) and think of the effort and engineering involved in transporting these enormous blocks from Carrara all the way to Florence, a distance of over a hundred miles.

The coast line from Pisa to Sarzana is straight and lined with sun umbrellas and beach restaurants - behind them the mountains rise over 6000 feet and have wonderful villages and towns hidden away in them. In these mountains are the 2 regions of the Garfagnana and the Lunigiana.

At the northern end of Tuscany the mountains meet the sea and form the beautiful area of the Cinque Terre, with wonderful coastal paths weaving along the cliffs. Villa close to the Cinque Terre.

The Maremma and the Southern Coast of Tuscany

The southern end of Tuscany, under the province of Grosseto, is a delight to discover. Less well known than Chianti, Florence and the area around Siena, it has some fabulous places to visit and see. There are Etruscan villages like Pitigliano, there is the old Etrusco-Roman port of Roselle, now far inland as the old bay has filled with land. There are the hot springs of Saturnia and the marvellous quasi-island of Argentario, connected to mainland Tuscany only by a couple of narrow sand strips.

Villas in the Maremma region

Arezzo is far less known than Florence but is a fabulous city in its own right. Located in Eastern Tuscany, just an hour’s train ride from Florence, Arezzo sits at the unique hilltop crossroads of four valleys: the Val Tiberina, Casentino, Valdarno and Valdichiana. One of the wealthiest cities in Tuscany due to its history in gold-smithery, the city is a hidden gem for the European traveller; a beautiful and vibrant city steeped in rich art and architecture. Generally free of crowds and masses of tourists, discovering all that Arezzo has to offer provides an authentic experience of Italian history that can be enjoyed at one’s own pace. No wonder that it was chosen as the setting for the film Life is Beautiful. Here, in fact, it is.

If you're thinking of staying close to Arezzo, a good option is to stray across the Tuscan border and stay in Umbria, close to Lake Trasimeno, a large 'inland sea' with islands you can visit. Cortona is also close by, of "Under the Tuscan Sun" fame, the famous novel by Frances Maye.

See all our villas close to Arezzo, and also our Villas in Umbria here. 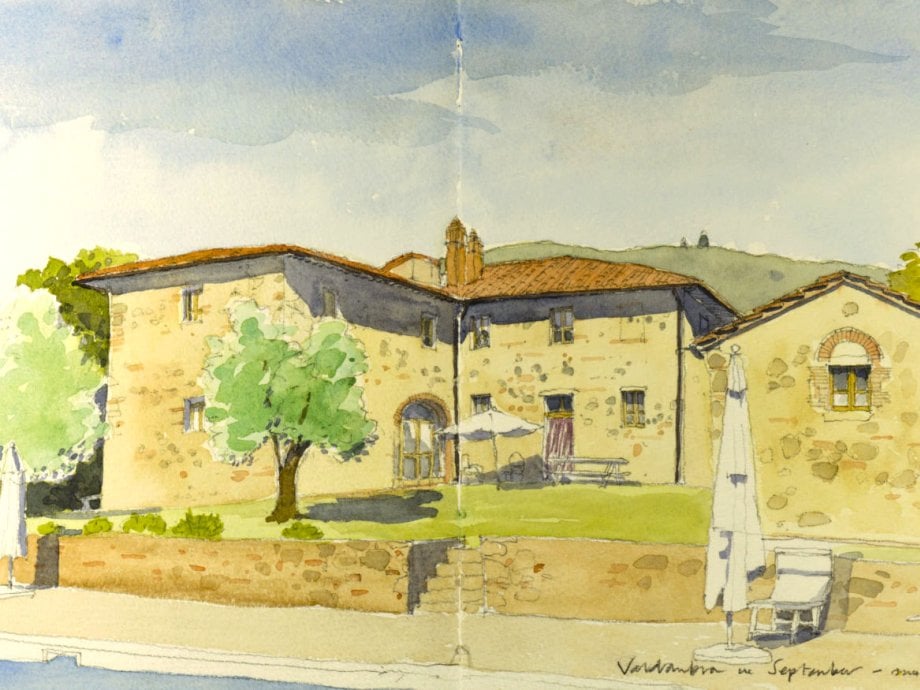